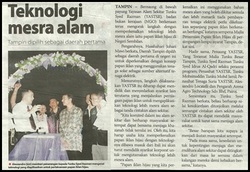 On 13 December, 2010 Tunku Syed Razman Environmental Foundation held the launching of their first Green Billboard in conjunction with the birthday of HRH Tunku Besar Tampin, Tunku Syed Razman. The billboard project is further expanding with the introduction of Solar Technologies for green environmental friendly concepts in Negeri Sembilan. Introducing the concept of a Solar Powered billboard that uses solar energy as an alternative source of electricity . Tunku Syed Razman Environmental Foundation hopes to educate and enlighten other companies, especially those carrying billboards to be more technology-friendly in nature as a sign of love for the environment. The Green Billboard has introduced eco-friendly materials that can be recycled and is more cost effective including the fact that no loss of electricity will take place during work on the billboards.